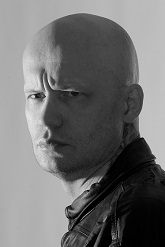 THE INDIAN FRONT OF SPIRIT

THE ABSOLUTE REVOLUTION
Our line of sight in the Revolution:
One must learn to ride the dragons ↑
Dragons of Horror kill dragons of fear ↑
The Revolution from within ↑ …
Beyond the beyond and Upward ↑
Beyond all forms, and no forms ϟ
To think about Shunya only with
the help of Lightnings

You have a mysterious name. What is the secret of your name? Who are you?

My name is Andrei Azsacra. But in the East and the West all know me by the name Azsacra Zarathustra. However: I am not the Persian and/or pro-Islamic Zarathustra; I am only based in Russia and India ― my two primordial Sacred Native Lands. My “philosophical language” is derived from Russian and Sanskrit.

You have many philosophical concepts. One of them is “The Indian Front”. What is the meaning of this concept?

Like I said earlier, I am a Russian by birth, but simultaneously I am an Indo-European thinker or, if you wish ― Indo-Aryan. Arya! I study the most secret ideas, manifestations and rituals of Ancient India. I write about them in my books, films and specially-created mantra-music. I aspire to reveal the most hidden riddles and ciphers of ancient the Indo-Aryan Gods and Heroes. In other words: I want to revive the Spiritus Mundi up against the present economy-based existence, by means of a powerful Indo-European Spiritual Uprising. An Indo-Europe Rising! This is the Indian Front of Spirit! Undoubtedly, today only India, as Spiritual Heart of the world, has the capability to overwhelm the consumer-addictive illusions of post-contemporary, and temporarily weakened Europe. Many people are thinking that the crash of Europe is irreversible, but I am convinced that, very soon ― first in Europe and America ― there will begin (in a flash!) one of the particularly strongest Spiritual Revolutions possible ― a revolution of an Entirely Different Weltanschauung. First of all ― there will be a Revolution from within! For this purpose the “soul of each” will pass through the Over-active Shunya ― a magical and terrible Zero point ― a point of Nothing to Power and Emptiness to Supremacy. The Buddha of Europe is, as a matter of fact, the Anti-Buddha! It not the thinker who calls for dilution and dispersal in the state of Nirvana, but on the contrary ― he strives to strengthen more greatly all ideas, laws and principles contributing to the Will to Live as a holy Yes to Life.

What are your coming plans in regards to creation and activation of the Indian Spiritual Front?

I plan to continue further development (both theoretically and practically!) of my concept of “Shunya-Revolution” and the doctrine “The Absolute Revolution”. I will continue to explore in depth, as before, the Will to Life ― through the conditions of the maximum interpretations of the experience of Death. Europe, in its study and interpretations of Nietzsche, Heidegger and etc., has learned only about “a passive stage” of the nihilism, burdened with a damned “spirit of heaviness”. But Europe and America never knew about the principle of the Over-active, Solar Nihilism, as the most unstoppable form and process of Will to Life, which rigidly eliminates any “will to the power” (i.e. that which treacherously blocks Absolute and Exulting Life Way). Id est: I study Death not as a certain “limit” or “infinity”, but how (here and now!) my own Iron Will, which even in the Absolute Non-existence and Total Absence, is capable of the most fierce and ferocious Resistance and Struggle against any kinds of “weakening”, “death”, “dying” and “disintegration”. The Future of Spirit is an absolute uprising of all the most fearless forces of India, plus the total mobilization of all the most courageous forces of Europe. I am talking about an Indo-Europe Rising!

You spent your childhood in Russia. What events in that period influenced the creation of your main philosophical and revolutionary concepts?

In my childhood I very often faced various types of death among both people and animals. The basic tragedy of living a life becomes even more intense when one also faces experiences of dramatic death. Thus ― during my childhood ― I already began an uncompromising Spiritual Struggle: I began to become obsessed with the protection of trees, animals and birds, everywhere I saw them. At one point I founded in the Urals (in Russia) the largest center for providing help to wounded birds of prey: “Maiastra”. This center has now existed for almost 20 years. Besides birds of prey, we treat other predators ― but also non-predatory animals as well. My personal development encompassed first of all ― real-life practice, and then ― I developed the theoretical aspects of my philosophy. I have thus lived most of my life not in the cozy “calm of a house”, but among real-life dangerous people and predators. They, and only they (as well as, perhaps, the books and soul of Jack London) truly taught me about the Will to Life. Melville’s Captain Ahab says: “I have no personal history with Moby-Dick, no revenge to take … but I do have a becoming! Moby-Dick is neither an individual nor a genus. He is the borderline, and I have to strike him to get at the pack as a whole, to reach the pack as a whole and pass beyond.”

You have a very severe and inexorable philosophy. Can you tell us why this is so?

Very often I am accused of being cruel, and even “evil” as a philosopher. But the grass, animals, trees and birds ― they must also have unshakable friends and faithful defenders. I am not “evil”, and I am not “cruel”, but I am, rather, the one who inexorably destroys and divides each instance of evil, and directs its pure energies against the remainders of “prior dirt”. First of all ― every day and every night I strike ruthless blows against myself. By rigidly acting and really struggling against the mere “man” in myself, I skillfully reveal those initially hidden forces of Soul and Spirit, which are the only ones that can and will define the further life of the Light. Yes, I am the Light! I have always acted, and always will act, as the vital fighter of amor fati and mystic of the Will to Life. But for some reason, some moral liars and intellectual hypocrites constantly attempt to equate “Will to power” with dark and demonic elements.

You often speak about “Fearlessness of Soul”, “Strength of Spirit” and the “Iron Will”. Do you mean that the man must become the Übermensch?

A priori “there is no immortality” is overcome only through a posteriori “there is no fear”. The main shortcoming, to be exact: the worst enemy of each ― is its fear. The fear is the identifier of each “man”. Remove the fear ― and there will be no “man”. There will be no “former society”. But the result will then be a strong upswing [only Upward-bound!] of the most initial of its components ― Spirit and Soul. I struggle for the Absolute Making of the Spirit through new types of Light Revolutions. Consequently, I build upon my philosophy in order to deprive man of his “indispensable fear”. Accordingly, with such a severe approach, the main virtues of each become ― Bravery and Fearlessness.

The Internet ― is a huge information field which is overloaded with various data. How does this miracle of technological progress influence your work?

Sometimes the matrix and “hollow” of the Internet coincides and strengthens telepathic influences within “the lonely fighter” of Thought. It happens seldom, if at all; but when it does occur ― a simple falling speck of dust can overturn not only the world, but also all of the divine Universe. But on the other hand, a revolution can only take place if we close ranks within our reality. Now we must fight shoulder-to-shoulder. And together we will surely raise Indo-Europe in Spirit!

What is your concept of “enlightenment”?

Enlightenment for me entails thinking without fear and without the hellish constraints of worrying about money, work and summer holidays. I believe that we should live with a feeling of and behavior exemplifying responsibility for all lives – all at once – and without the idea of separating “bad” and “good” acts of bravery. To be strong really means to be, as bequeathed from Nietzsche, beyond Good and Evil. Or to be more exact: to be only in the Flaming Depth of one’s own fearless heart.

Where it is possible to find your books?

My philosophical and revolutionary books can be found and ordered at ▬►