Harshada Pathare, a poet of the human innermost feelings, intently wields the pen of her craft to expand the mind like an artist wields a brush. She dwells in her cherished inner sphere, where she is in touch with the world. This enables her to glean information about populations, their personal value systems, and interestingly employs such sensuality in her writings. Harshada Pathare employs immense creativity, flexibility, and ingenuity to organize her poetic ideas; thus, ensuring this anthology stands out to be yet, one of her most influential and credential poetry composition.

Akshat “The Reflection” Sharma, is an aspiring poet. Currently pursuing engineering from VIT UNIVERSITY, Vellore, Akshat, always had literature as his first love which was soon collaborated with music. Inspired by works of various poets like James Morrison and Lord Byron, yet with a different taste, he was soon thrilled by various emotions that a common man comes across. An ardent follower of music, especially genres like Heavy metal and Psychedelic Rock, his work revolves around human psyche and its inner self as a human.

Sweta Srivastava Vikram (www.swetavikram.com) is a Pushcart nominated-poet, novelist, author, essayist, columnist, blogger, wife, yoga-devotee, dancer, and oenophile whose musings have translated into four chapbooks of poetry, two collaborative collections of poetry, and a fiction novel (upcoming in April 2011). Her scribbles have also appeared in several anthologies, literary journals, and online publications. A graduate of Columbia University, she lives and writes in New York City and reads her work across the United States, Europe, and Asia. Sweta also teaches creative writing workshops. Follow her: Facebook (http://www.facebook.com/Words.By.Sweta) 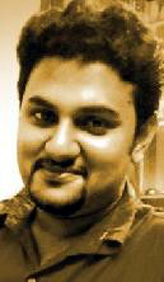 Sonnet Mondal is an Indian English poet residing in Kolkata, West Bengal. Starting his poetic career from the year 2005 he has authored 4 books of poetry namely A Poetic Peep Into The Post Modern World (2007), The Curse of Atlantis and Other Poems (2009), 21 Lines Fusion Sonnets of 21st Century (2010) and Penumbra of Indian Verses (2010). He has authored a translation book named "Songs from The Ashes" and has been published in several world famous journals and literary magazines including Stremez, World Poets' Quarterly, Houston Literary Review, ERI Jams magazine, Conifer’s Call, the Brown Critique, Danse Macabre, Muse India,Wilderness House Literary Review,Edit Street, Other Voices in Poetry, Hudson View, Aphelion, Kritya, Homeless Diamonds,Writers Editors Critics, Taj Mahal Review, Istanbul Literary Review etc. He was awarded Poet Laureate from Bombadil Publishing, Sweden in 2009, appointed as the Sub-Secretary General of Poetas Del Mundo in 2009,  and was conferred Doctor of Literature from United Writers Association, India. Sonnet was inducted into the Significant Achievements Plaque at the Museum of the 154 year old Bengal Engineering and Science University, Shibpur. Sonnet is the pioneer of the 21 Line Fusion Sonnet which are 21 Lines Sonnets unlike the popular 14 line form. He is the Managing editor of The Enchanting Verses International journal of poetry (ISSN-0974-3057) and the chief editor of The Bombadil Review. He is also the founder of the United Minds for Peace Society and the Musical Oasis for Resurrection. His poetry has been read out as message of peace to the world at World Poetry Cafe show, Canada and has been displayed at World Poetry Display at Vancouver Public Library in 2011. He has been officially invited at the prestigious International Struga Poetry Evenings, Macedonia to represent India in 2011 in their 50th year ceremony to increase the cultural co-operation between the two countries. His upcoming poetry book is Diorama of Three Diaries.